Ndemic Creations is incredibly proud to have been invited to the Stockholm Forum on Peace and Development last month (May 2019). Organised by the Stockholm International Peace Research Institute (SIPRI), this is an annual conference which sees peacekeeping experts from around the world gather to discuss new ideas and possible solutions to some of the most complex post-conflict problems unfolding today.

The organisers of the conference had reached out to invite us after playing our latest game, Rebel Inc., and were impressed by its realistic depiction of the challenges of real-life peacekeeping situations. The fact that over 4 million people (and counting) are now playing Rebel Inc. and engaging with the topic of peacekeeping is something they were very keen to discuss!

“Rebel Inc. lets everyone wrestle with the messy challenges of post-conflict recovery and better understand the complex realities of building peace.”

Our own James Vaughan, designer of Rebel Inc., was interviewed by the World Bank’s Global Lead for Stability, Peace and Security, Laura E. Bailey. He spoke about how games such as Rebel Inc. could be used to help teach people about the complexities of peacebuilding.

Experts currently wrestling with real life challenges from all over the world also gathered to quiz James, on how the game was put together, and how it might be useful when educating people on the issues they have to attempt to overcome on a daily basis.

During the talk we also learned an awful lot about the situations unfolding on the ground in places such as Afghanistan, Syria, Colombia and Nigeria. It was fascinating to hear directly from those involved, and very humbling to hear that much of what we have built into Rebel Inc. is reflective of their own experiences. We’ve plucked out a few highlights from the talk below. But if you’re keen for more insight into how Rebel Inc. was made, and what the experts think about it then do give the full interview a read via the World Bank website.

This is not the first time that Ndemic Creations has seen its games the focus of international expert attention. Our first game, Plague Inc., with 120 million players and counting, saw James invited to give a talk at the Centers for Disease Control (CDC). Read more about that here. James will be talking more about Rebel Inc. at the Games For Change conference next week in New York.

The following quotes are from James Vaughan, designer of Rebel Inc. and Plague Inc., speaking at the Stockholm Forum on Peace and Development.

“The Afghan ambassador to the UK took me through some of the experiences he had, and we were able to put those in as a ‘decision’. This is where we give the player choices of how to engage with an unfolding situation in the game. He gave me the example of stop and searches in Afghanistan. There were female soldiers conducting searches of female villagers, but the villagers didn’t realize they were female soldiers as they were wearing helmets and full uniform. The assumption that men had been conducting these searches caused a huge amount of friction among the local population until it was investigated.”

“A key non-Afghanistan inspiration was peace negotiations in Colombia with FARC. Unfortunately we don't have a situation at the moment where there is a Taliban peace process that I can look at and follow through, so that was a great example of somewhere we can look elsewhere for inspiration.”

“We had a tester playing the game for the first time who couldn't win and kept failing. Eventually he discovered that there were cheats in the game. He gave himself a load of money and spent it all thinking he couldn’t lose now. He spent a load of money right at the start of the game, but inflation is modelled in there. Inflation went through the roof, and despite the infinite money he had he couldn’t afford anything and he lost the game in a new way.”

“We didn't want to promote a view that western people will come along and fix it all. The game is absolutely structured from the beginning as: you are not a western organization. You are a national governor and you can call on the coalition forces, but you are not a western organization. It was a tricky one. I tried to balance it by talking to people who were from Afghanistan rather than just lots of western journalists.” 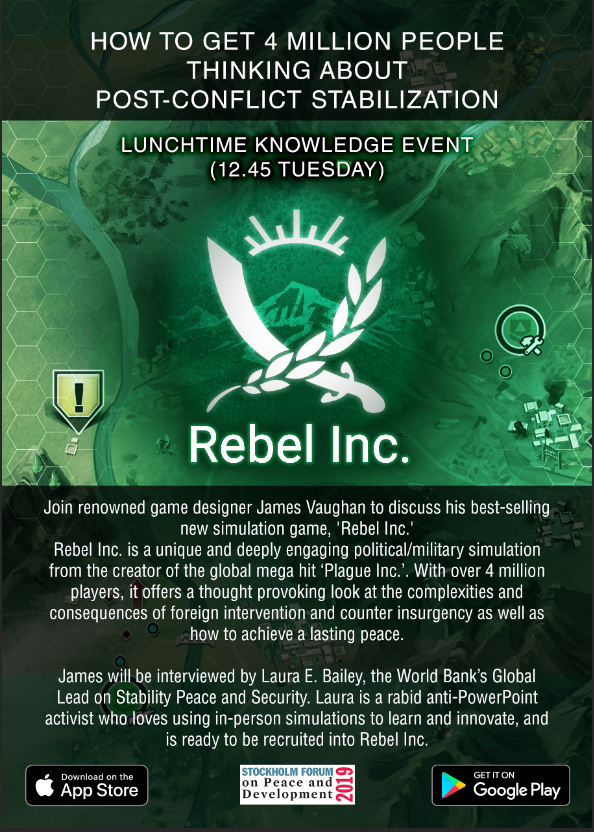